It is a WYSIWYG editor of structured documents: texts that have hierarchical and semantically meaningful (oxymoron, no?) structure: headers, list, plaintext islands, tables and so on.

HTML-NOTEPAD is not a “web page editor”. Don’t even expect to create “cool web pages” with it.  With modern CSS, WYSIWYG Web design is simply impossible. Web pages are crafted manually by editing CSS, that is by nature of CSS.

But still HTML-NOTEPAD can be useful for Web designers too – for the cases when we need to create textual (yet structural) content of our pages. This very article I am editing in HTML-NOTEPAD: 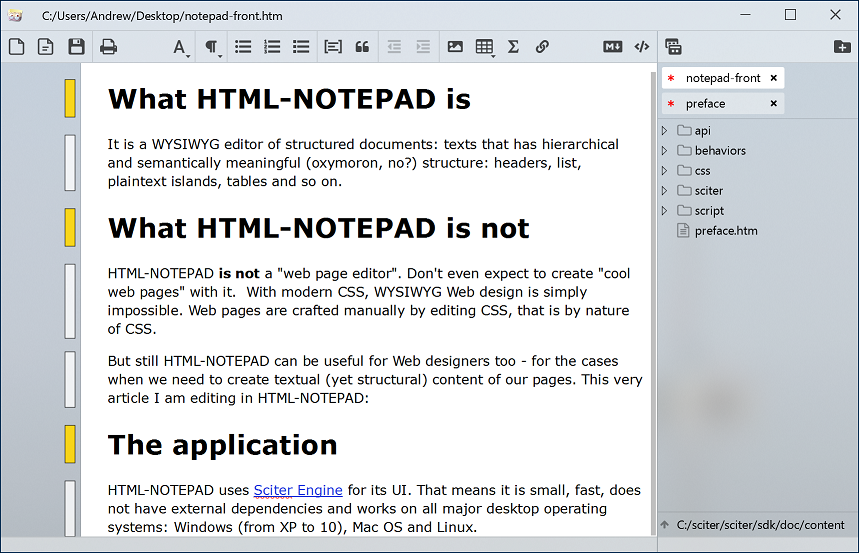 HTML-NOTEPAD uses Sciter Engine for its UI. That means it is small, fast, does not have external dependencies and works on all major desktop operating systems: Windows (from XP to 10), Mac OS and Linux.

And exactly in the same way:

To support keys-only editing as much as possible:

To support various representations of structured text that are used actively on the Web:

WYSIWYG editing has limitations – some operations are significantly more convenient to do in source code representation. That’s why HTML-NOTEPAD supports “pass-through selection” – selection in one representation is kept in another. This helps to quickly switch between representations:

More ideas like that and here is where you, the reader, can help. Please consider that option – we all need the editor of humans.